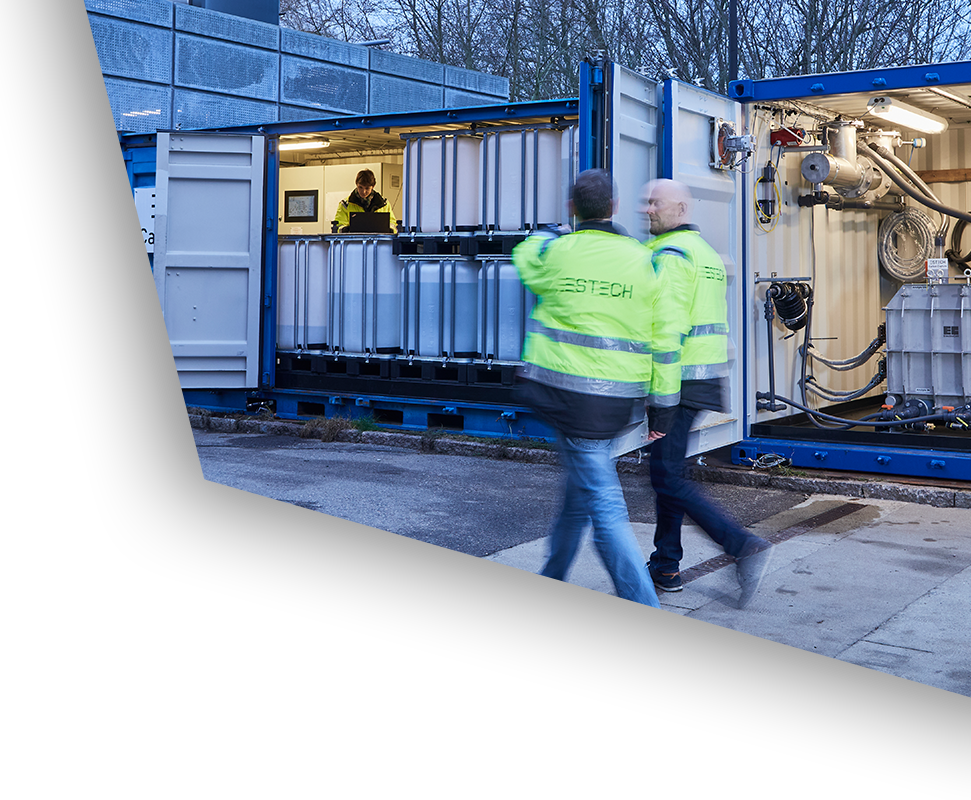 ESTECH A/S, which was established in late 2018, is an engineering and development company that further develops a number of the high-tech and economically sustainable environmental technologies that have previously been placed in its sister company PureteQ A/S. ESTECH is a subsidiary of the PureteQ Group with its administration, testing centre and production based in Svendborg, Denmark.

At ESTECH we are at the forefront of technology development not only of Carbon Capture, but also the production of green hydrogen. We have developed and patented a unique combination of Carbon Capture and parallel production of hydrogen. The technology is unique in its approach to Carbon Capture, as it merges two operations in one combined process. The ESTECH system provides cost-efficient capturing of CO2, and a maximum integration to Power-to-X between CO2 capture and hydrogen production – solely based on green electrical power, with no thermal heat requirement.

The ESTECH system is highly scalable even from very small emitters, such as decentral gensets, power-plants or industrial gas boilers, and to upscaled large CO2 emitters as well.

Carbon Capture & Storage technologies have significant potential, and focus will be on getting the technologies up in scale and down in price. At the same time PtX and green fuels is becoming a dominating solution for real life emission reductions.

CHARACTERISTICS OF THE ESTECH TECHNOLOGY

The result accomplished on the laboratory scale plant was promising and included design of an electrolysis cell capable of handling the process chemistry. A bigger scaled plant was therefore constructed and deployed to a nearby industry for in situ testing on real exhaust gas from biogas fired generators. With our successful pilot project, we have already written development history with our innovative new technology to capture CO2 from exhaust gas and produce hydrogen in a highly efficient way in one and the same process – using only green energy.

The technology makes it possible to capture CO2 that can be sold or stored, and in one and the same process produce hydrogen of very high quality as well as oxygen and heat, which can also be re-used. The pilot plant has been running since January 2021, and the documented results are so promising that already by end of 2021, the solution was ready to be scaled 10-100 times.

We have quickly come a long way in the development work because we have been able to draw on PureteQ’s patented exhaust gas purification technology which is based on hydrodynamic fluid distribution. The hydrodynamic fluid distribution ensures optimal conditions for reaction between gas and fluid, whereby the size of reaction chamber/scrubber can be reduced. PureteQ’s specialty is not only pertaining the scrubber tower but moreover the process control; measurement and integration of the process as a whole in an integrated, operational secure and measurable system, which can be serviced remotely via remote control and AI-based tools. All parameters can be monitored from the distance and repaired / adjusted when necessary.

Selected results from the pilot plant in Odense, Denmark

FROM PILOT PLANT TO COMMERCIAL PLANT

Tests carried out at our pilot plant shows that a high percentage of the green energy used is utilised in hydrogen production. It therefore has the potential to become the most energy-efficient CCS technology on the market for small and medium-sized industries with no available thermal energy. As of December 2021, ESTECH/PureteQ has been granted funding via the Danish Energy Technology Development and Demonstration Program (EUDP) for the development of an even larger containerised demonstration plant. The new plant is expected to increase capacity by up to 100 times.

The pilot plant continues daily operation, and a larger fully functional plant is being planned for commissioning during 2022.The first commercial ESTECH CCCH2 plant is expected in 2023/2024.

You can follow our further developments by reading our news releases.

At our current stage of development, the potential applications of our technology are almost limitless. However, our commercial focus at this point is a fully developed ESTECH plant aimed at small and medium-sized companies, which today have access to electricity but cannot immediately electrify their production. The plant can be installed at combined heat and power (CHP) plants and waterworks, as well as any industrial production facility that emits CO2.

Potential commercial applications include many thousands of companies in various industrial sectors, as well as utility companies and other major energy consumers in the public sector, such as hospitals. In principle, the plant will enable anyone with a gas boiler of a certain size to optimise their use of traditional energy sources with exhaust gas purification and CO2 capture combined with hydrogen production. Today, such a cost-effective solution is not available to the many companies and institutions within this sector, despite the fact that they are major contributors to Denmark’s overall CO2 emissions. We therefore consider ESTECH CCCH2 as a complementary technology to the traditional amine based CO2 capturing technology, which can only be used at sites with access to thermal energy. Our technology is ideal for decentralised Carbon Capture on smaller industrial sites, not just large installations such as power plants.

The ESTECH technology is suitable for small and medium-size CO2 emitters but can be upscaled for large CO2 emitters where thermal energy is limited.

Our technology is also part of the government’s upcoming climate strategy, which will focus on new technology within carbon capture and the production of green energy. The goal is for Denmark to be climate neutral by 2050 and to reduce CO2 emissions by 70 percent by 2030.

Pyrolysis of sludge is an environmentally interesting area where dangerous, organic and chemical residues are captured, but where large amounts of CO2 are emitted in the process. VandCenter Syd (Danish waterwork) converts, for example, faecal sludge into biogas and sludge in general into agricultural fertiliser. When the sludge is purified via pyrolysis, it becomes green manure. The purification, CO2 capture and simultaneous hydrogen production abilities of ESTECH’s technology is therefore an ideal solution to very specific challenges.